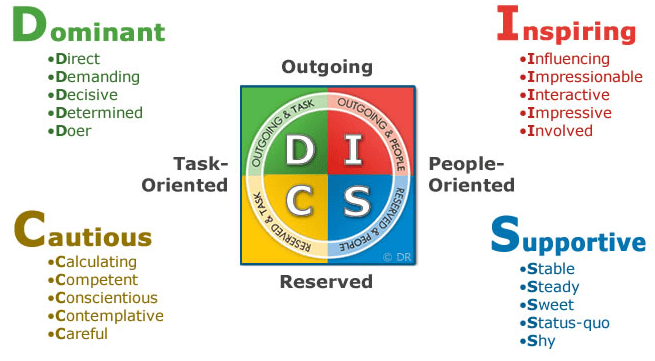 There are many technical articles that compare DISC to MBTI (Myers-Briggs Type Indicator) , and various conclusions are made by each author. This article is intended to be brief and basic.

You already are aware that we use DISC in our personality assessments and profile reports, and it is obviously our behavioral model of choice. Even so, we want to explain briefly how DISC compares to MBTI from our perspective as a way to help you determine if DISC will serve your needs better. And, to those fans of MBTI, let us say at the onset, this article does not attempt to highlight MBTI and its benefits. We regard MBTI as a very credible, very useful psychological model that is the best solution for many situations, but not all situations.

What is Myers-Briggs (MBTI)?

MBTI has been around a long time and is a common personality assessment tool in large companies. If you have worked at a large company, chances are that you have taken an MBTI assessment.

Katherine Briggs and her daughter Isabel Briggs Myers were the researchers who formalized the MBTI concepts starting with Katherine’s work in 1917. Their work attracted others who helped formalize a methodology for psychometric testing along with statistical analysis for validation.

Wikipedia describes the Myers-Briggs Type Indicator assessment as ” a psychometric questionnaire designed to measure psychological preferences in how people perceive the world and make decisions.” It is based on 8 characteristics, 4 pairs of seemingly opposed traits. The opposing trait pairs are:

The resulting personality score looks like a set of 4 letters from each pair. For example: ESTJ or ISFP or ENFP  and so on. The definitions of each of the 8 traits are a little involved, so we will not cover them here.

DISC is a human behavior model originally presented by Dr. William Marston in 1928. DISC has gained widespread popularity primarily due to the simplicity of the concept.

Marston’s DISC model essentially had 2 sets of opposing traits instead of 8 as in the MBTI concept. While Marston used different terminology in his early writings to explain the traits, we have chosen explain those traits in more understandable intuitive terms as follows:

The four letters represent descriptive adjectives that relate to a person’s behavioral style or personality traits. Each of the 4 letters can be ranked in order from most predominant to least predominant for any individual person. Our DISC assessment yields 41 various blend combinations of the 4 letters, so that each person is a MIXTURE of ALL four traits depending on how much of each trait he or she possesses. .

One important point … the main misuse of DISC or any personality model is to assume that a person only has ONE trait. That is not at all the case. Each person has all traits to varying degrees. Any such methodology that boxes people in with ONE trait will surely be unproductive and inaccurate.

Why do we use and recommend DISC?

The short answer is, “because it is easy to understand and it works.”

But, more interestingly, there is a personal reason behind why we use DISC. Our Co-Founder, Robert A. Rohm, Ph.D., learned about the DISC Model of Human Behavior from a friend who was helping him understand and relate better with his daughter. Considering his daughter in light of DISC offered immediate help to improve their relationship. The experience was completely eye-opening and, really, life changing for Dr. Rohm. Dr. Rohm began to research DISC extensively, and, as a public speaker, he began to teach audiences what he was learning. He noticed that everyone responded to his teaching unlike anything he had ever seen before. He saw the power of the information and was compelled to write a number of books on DISC. He founded his company, Personality Insights, and dedicated the last 20 years of his life to teaching, training, writing and speaking based on the DISC concept. Everything we do stems from the experience between a father and his daughter.

UNDERSTANDING is the key to better relationships
and better results – personally or professionally.

Major advantages that we see for DISC over MBTI with use for most situations:

Is DISC for YOU?

Naturally, we favor DISC as the basis to provide personality reports that appeal to broad audience looking for an easy and practical tool. MBTI has been a proven and widely used approach, and it serves many organizations well. MBTI has a good reputation and is well documented. DISC is used by millions of people and thousands of business organizations with less clinical documentation, but plenty of empirical support data and numerous credible validation studies. If you are an industrial psychologist or you want a more formalized approach, then you may favor MBTI. If you are trying to figure out how to relate to your co-workers or family, identify your strengths or get insights on what environment suits you best, then DISC may be the best way to accomplish your goals.

This site was carefully crafted by Expresso Design LLC